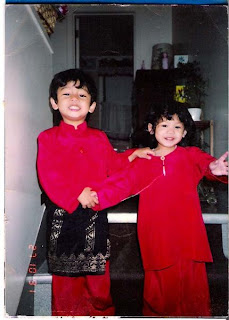 Friends,.. hurm… a very wide topic to talk about… how honest can we be when it comes to being a friend? Well, I don’t know. Personally, I kinda miss my old-time friends.. u know, during primary and secondary school…

Haha.. I remembered I was so quiet next to her, because she’s a girl and I don’t usually spoke to girls. But then, Azlina was different. She’s always trying to make conversation with me. She always teased me by calling me ‘camel’ because it almost sounded like Kamil. It gets to me every time. One day, I can’t stand it, so I scolded her for calling me names. “Azlina, boleh tak jangan panggil saya ‘camel’!(azlina, can u not call me ‘camel!)” Suddenly her eyes went red. She was about to cry. I felt so bad for making her wanna cry. So I said to her “yelah, panggil la saya ‘camel’(okay, just call me ‘camel’)”. Then she suddenly laughed. It was all an act. I can’t believe she tricked me! But I wasn’t mad about it. I just giggled. The most vivid memory that I remembered was that I lend her a pencil during math class because she broke hers. 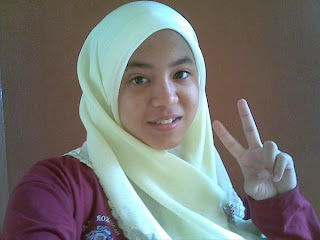 From that day onwards, we became best friends. When there’re no teachers around, we’d play with each other in our little corner. We played all kind of games… and she would always wins. Then when I get mad because of it, she would make those dreadful puppy eyes. It gets to me every time. During standard 5, I changed to the second class… haha from first class… owh did I tell u that Azlina is a very bright, clever girl?.. because there was so many competitions, I have move down to the second class due to my grades.. pfft.. But I wasn’t sad knowing that she was always there when I needed her.

When I was in standard 6, I develop a crush on her. But at that time, we wasn’t that closed… because she got her friends and I got mine.. and because of the hormone changes.. I was so embarrassed because I didn’t know how to go about it. Should I tell her? What if she doesn’t wanna be friends anymore? Etc. all kinds of question aroused… haha.. gawd I didn’t know life was already complicated at the aged of 12. lol. Guess what, I didn’t tell her.. hahaha….. silly me… during our graduation night, I took a picture of her receiving her diploma for finishing her primary school years. So that’s how my crush toward her ended..

3 years passed, and I heard nothing from her, the only I knew that she was in St. George all girls school whereas I was in SMKA Al-Mashoor all boys school.. talk about the being the exact apposite... anyway, I was best friends with Afif, who was Azlina’s classmate during primary school years. He introduced me to YM.. haha.. and he gave me Azlina’s YM… when she added me, I was so nervous even to chat with her… but then her first word in our conversation was “CAMEL!”.. puff! Nervous gone.. and I feel like I can connect to her once again. This time, I was so glad I got in touch my dearest friend once again. She got 8 straight As for her PMR and she was on her way to MRSM Langkawi. There she goes again… 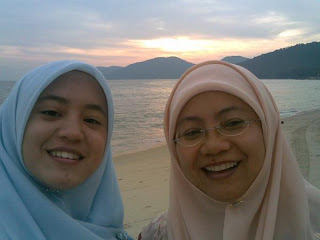 We never met flesh to flesh until we were form 5, and that was a big coincidence. It was mid semester break for us. Since both of my parents are lecturers of Universiti Sains Malaysia (USM), I followed them to their office. When I went to the convenient store, I saw a figure that trigged my memory of a cute little girl and now had blossom into a beautiful teenage girl. It was Azlina, in the flesh! I was so mesmerized by her beauty. What malay would say ‘ayu’ I can’t believe my friend whom I use to play with is now a very graceful girl… hahah.. When she noticed me, the word ‘CAMEL!’ just came right out of her mouth… I just giggled. It just so happened that her mom is also a lecturer in USM (Actually, I already knew that for a long time). But we didn’t even have the time to talk as she was about done buying her stuff. Awwww… hahaha.. by that time, we already exchange phone numbers. On the 1st on Sept 2006, I managed to sing her happy birthday.. haha.. for her SPM, she got 9As if I’m not mistaken. She’s that good!

She got into INTEC UITM. She said she wanted to do something with ‘bio’ in it.. haahaha.. I remembered she text messaged me when I was only a week in MMU. After that, I called her that very night to catch up on things. she even found her a boyfriend! they look so cute together.. haha.... After a year at INTEC (if I’m not mistaken), she’s going to Rochester Institute of Technology in NY to pursue her degree in Bio-mechanical.. sorry if I got it wrong. She told me like 2 weeks ago… I was so happy for her, and I promised to see her before she went off. 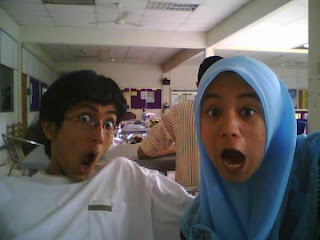 On the day that she’s going off, I woke up at 4.30 a.m, because her flight was 7.50 a.m. I went to KLIA at about 5 a.m. I arrived at KLIA around 5.30. as I was about to go to the surau, I bumped with his father. After subuh prayer, her father brought me to see her… and her first word when she saw me was KAMIL.. hahaha… when she’s about to leave, it was so emotional as there she was feeling kinda scare/happy/nervours at same time. Even her boyfriend came …awwww… that’s so cute! I was so touched to see my dearest friend going abroad. She was glad I came. I was glad too that I came. 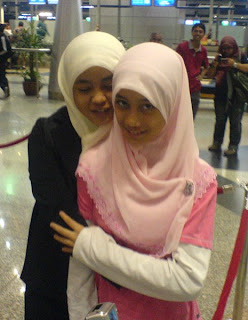 It’s friends like this I’m searching for in this very world. What I have with her is guinuine, pure and honest ; FRIENDSHIP. I almost burst to tears seeing her going through that autogate.. but who was I to wept into tears. I should be happy that she’s going there. Azlina azizul, thanks for being my friend. Hope you read this. 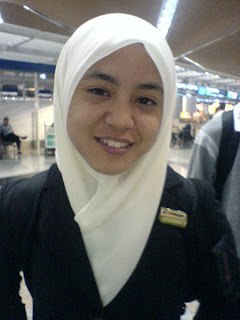 kalau aku nanges je kot. sedey kot member plg best kau blah. at the same time u know its wats best for her and thats what makes it so hard and thats why nk nanges nk mampos hahaha