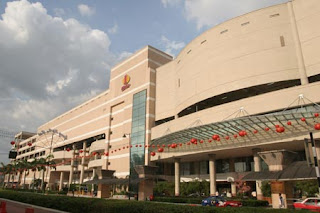 It was a Sunday night... it was blurry... then Haziq said that we should get out... his idea was to catch a movie... so Acap and me did a survey to see what's good out there to watch. I wanted to watch mamma mia.. I've been waiting for it since i can remember... knowing Acap, he's the type that like to watch all those action-thriller-horror kinda movie.. so there was "Flight of The Living Dead"... we thought it sounded catchy enough to caught our attention.. then, from out of the blue, Maher BUZZ!!! me... i told him the plan.. he said he wanted to join us... so i invited Lana and Nad to the 'party'! so the peeps were, Haziq, Acap, Maher, Nad, Lana, Wan, Mawi and me! by 9.30, we're set to leave for OU..

when the 5 of us got out of the lift, the jaya jusco was already sealed.. it was already 10.30.. no wonder... we went crazy looking for the entrance since all the main entrance were all closed.. thank god we stumbled upon a guard, and he said we have to go to the ground floor and enter the new wing from the main entrance of the new wing... when were 'lost' there, there was this chinese couple who were lost as well... there was this part where we were in and out at the very same place, haziq and me scared the hell out of the chinese couple by sneaking up on them using an opposite door..MUAHAHA...

finally we arrived at the new wing in one piece.. we survived! hahahah.... we went to the cinema and meet up with the rest... Wan bought 8 tickets to see "Flight of The Living Dead"...

the movie was freaking laaaammmmmeeee! booooorrriiinnng! damn! i cant believe i wasted 8 bucks to watch that crap!

the movie is about A flight from the U.S. to Paris contains some top-secret government cargo, and the doctors on the plane who are associated with the cargo are very nervous. When turbulence causes the cargo to pop open, the fun begins. Next thing you know ... zombies on a plane. Every potential plot twist is preceded by hints that a child could guess, and you should be able to figure out who will live the longest after the first 15 minutes. The scenes of crazed zombies overrunning the plane (and believe me, I am spoiling nothing by telling you this) are the best parts of the movie.
(quoted from http://www.cinematical.com/2007/09/27/fantastic-fest-review-flight-of-the-living-dead/)

the movie has a lot of cliche... for instance.. there is this man who play golf who happens to carry his club.. that he uses to hit the zombies.. then the old pilot who said that this is his last flight.. cliche! there is also no witty one-liners that would make us remember about the movie... maybe that's the point!.. hehehe

after watching the movie like 30 minutes, we can tell which character is the hero... we we're all felt like leaving but we already paid 8 bucks.. better make it worthwhile... when it came to the part where almost half of the people in the plane we zombies and they were ripping the guts of other passengers.. it went from bad to worst.. we were all started to laugh! the way the zombies were killing, ripping, eating people was kinda funny and awkward that we can help it! the others in the cinema were also laughing! how come something that supposed to be scary/gory/horror became so stupid and funny?