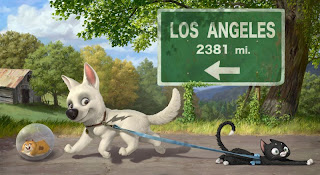 Bolt, an American White Shepherd, has lived his whole life on the set of his action TV show, where he believes he has superpowers. When separated from the studio by accident, he meets Mr. Mittens (actually a female cat) and a hamster named Rhino. Along the way, he learns that he doesn't have superpowers and that the show is not realistic.
(http://www.imdb.com/title/tt0397892/plotsummary)

It was the usual Friday night and we have nothing else better to do then to watch movies. So that's exactly what we did. We went to Alamanda to see Bolt. Basically it's a story about a reality tv show dog stumbles to the real reality for very the first time. every second of the movie is filled with adventures. What I like the most is the characters in the film. it makes me wanna have them all as pets in all their cute ways. The character I probably like the most is Mittens the alley cat. Mein said that the hamster, Rhino looks and acts like me. She said Rhino's chuckles are like mine.... whatever... the story is very compelling thanks to John Lasseter, the producer who had a major influence on the production. In addition, the story is about friendship and love which make it a fun movie for both the old and the young generations. I would recommend you guys to watch this funtastic film!


Bolt it's like The Truman Show.. the main character, Jim Sarrey never been before stepped into the real world..

Owh, after that, we went back to cyberia... to watch the most anticipated movie this trimester.. at least for mein and me, which is SAW V.
damn it's gory and nasty... but we liked it... a lot! 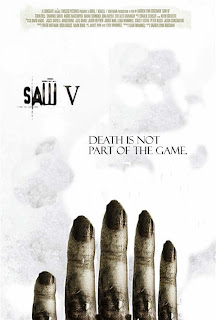