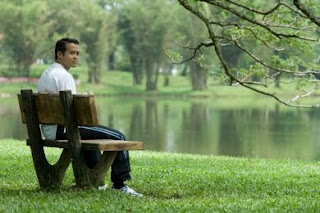 Last friday.. I was so bored.. because it was the weekend... yipeee (not that entusiastic)luckily Liyana and Nad was bored as well.. so after having our dinner at Hasan.. Haziq, Liyana, Nad and I thought of going to alamanda for a kareoke session!.. but Maher said he wanted to watch Sepi.. so Sepi it is! Sepi is a love story which compiles 3 different conflcts that connects the 3 of them in one event.. well, moving on..before leaving for alamanda.. we went back to MMU to fetch Alia.. our dearest makcik.. Then off we go to alamanda! the five of us arrive at alamanda around 11.30 pm.. there was a lot of people.. we we're all like "what.. why?".. hehe.. after purchasing the tickets.. Maher arrive.. so we hang for awhile.. exactly 11.50.. we bought popcorns and cokes..inside the theater.. I saw a lot couples and women being the majority. well.. it would be very disurbing and weirdif u see a group of guys came to watch this movie.. hahah.. i'm so glad I went with liyana, nad and alia.. haha..
It was a decent love story.. very well scripted.. but the script in Cinta is better because is believable.i like the cinematography.. two thumbs up to khabir bahtia.. i have to give props to afdlin shauki because in this movie, he really went out of his comfort zone.. gawd i could feel his pain of not having "the girl" in the movie.. in the film he plays a celebrated chef frustrated with his inability to find a potential wife.... i kinda feel his pain because hey I'm a big guy as well..

Most of the people there cried watching the movie..even Liyana cried.. we all teased her after that.. muahahahah.. how insensitive of us!.. who cares!.. before heading home, we went to precint 9 for supper..
Posted by Brader Bear at Sunday, June 29, 2008

I shall link you when I'm not feeling lazy.
For the mean time, YOU'RE TAGGED.
Copy the questions from my blog & paste it on yours & answer them!
(: