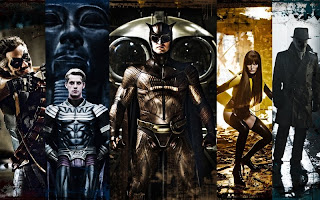 watchmendvd.com
Last saturday... a bunch of us went to watch Watchmen.. and they said who's watching them.. hehehe.. ok that was lame..

anyway... a dear friend of mine ask me blog what I think of the movie, (u know who u are, XP)

so this is my humble opinion of the movie..


A very well plotted movie if you ask me... the movie is actually adapted from the 12 series of the most celebrated comic book. So u can imagine how hard it is to mashed the 12 series comic to a 2 and half hour movie. the way that the movie carries the audience to each and every character is simply superb. there never was a time where i felt so lost in the movie as the bits and pieces of the characters fell to places at the right time at right moment.

Watchmen is a very effect-driven movie. I just love the fighting scene; brutal, violent and gore. I kinda think that the promotional posters of the film tend to be misleading. it's not a movie for children for there's also a lot of intimate scenes. i find that very hard to swallow since I was actually looking forward to the violent stuff.

Speaking of vfx wise, it was at its best. It's proven with such work as Rorschach’s iconic shifting mask (TOTALLY ROCKS) and not to mention Dr. Manhattan’s cerulean blue body, complete with genitalia (but was cencored throughout the movie, bummer). 2 thumbs up for the VFX team! 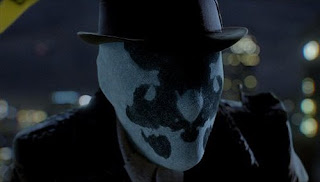 As u all might know, zack snyder, the forever aspiring director of the movie 300, is also the director for this movie, so i got what i expected; a movie that is not to slow and not to fast.

Zack snyder once again proved that his visual sense is very strong. even though it's a movie, he did not lose the comic touch as to display the amazing comic-book stlye which is sure pleasing to the fan of the comic book.

Never the less, there's always a downside to every greatness.. what can i say, nothing's perfect.. heheh

When i saw the trailer, I was expecting a movie pack with action, but it proved me wrong. there weren't a lot of fighting scene but when it came to those parts, they're pack with brutalness. besides that, there're some awkward moments in the film where I find it quite humorous especially an intimate scene between Night Owl and Silk Spectre on Mars.. what the hell... sorry for not thinking abstractly... I just can't find the art in that... u guys have to see it for yourself and find them.. hehe

The idea of the whole pseudo-america is quite intriguing. There this part where Night Owl was arguing with The Comedian.. it goes like this..

The Comedian "we're societies only protection.."

Night Owl "protection from what?!"

The Comedian "from themselves" 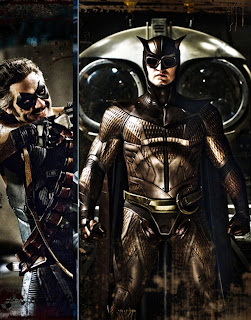 The comedian and Night Owl
That part really struck me. From the movie, it shows that mankind are becoming.. well.. less human even we have to be teach a lesson or two when it comes to becoming a human.