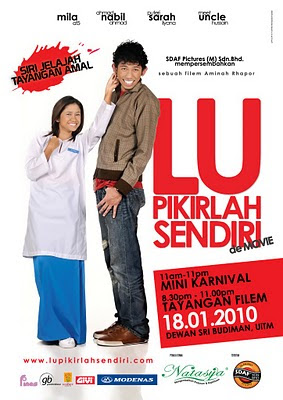 I'm mad... no! I'm way more than mad... I'm furious as hell right now.. why? it's because of the new movie Lu Pikirlah Sendiri de Movie. There's so many things I wanna talk about but I'll try not to bore you guys to hell just like what I endured when watching this 'oh-so-shamed-that-I-hate-to-say-the-title' movie.

Ok, just a quick brief synopsis just to make you guys clear of what I'm gonna bash out later.

"Nabil (Nabil Raja Lawak 2), an SPM qualifier, is a hard working delivery boy. During the weekends, he works at a motorcycle workshop by day and sells 'kuay teow' at night to help his friend. Natasha (Puteri Sarah Liyana) is a daughter of a multi-millionaire, pursuing her tertiary education at a local University. By common stereotype, it is impossible for these two people to fall in love. However, it seems that fate has its own plans."
taken from cinema.com.my

What really caughy my attention is the movie posters. To me, it's decent, simple and sweet and not like many malaysian movie posters where they deliberately stamp all the actors/actresses that is in movie into that not so big space plus the boring typography even my sister can design even better. wait a sec, let's focus here...

Aminah Rhapor is the woman to blame for my furiosity. I know this is here debut directing a film but god! This has to be the worse movie I've seen during my 20 years of my life. Heck, she made Razak Moheideen's movie seem way better and I don't really like his movie. So you guys kinda get the picture of why her movie sucks.

First and foremost, what the hell is up with the storyline. If you ask me, there's no storyline at all. the term storyline means that there is a 'line' that the story goes from point A to point D for example. Along the way, there's B which is the build up and C which is the climax. What Aminah Rhapor did was very unclear from the start. Jumping from B to A then goes back D but there is never a C. Yup, I didn't found any climax there.

Besides that, Aminah Rhapor fails as a director obviously. I said that because the actors/actresses fail to bring their character to life. I know that they're not all great actors/actresses, but there where good directors come in. They DIRECT them to do what their supposed to do. During the whole movie, I can see Sarah Liyana fails to execute an angry guise and constantly has a 'this-is-so-funny-but-I-can't-laugh' facial expression. I mean come on man, how unprofessional can you be. This shows that Aminah Rhapor doesn't do enough shots (good ones at least) to even call it a great take. Aminah Rhapor, you're a lazy director who doesn't even know what you want from your actors/actresses. In addition, some scenes are just not interelated to the last or the next shot or simply illogical to begin with. Furthermore, the movie tries to tell every character's story until the audience got mislead.

I hate to say this but the script is not good at all. It doesn't seem natural and I noticed that when 2 characters are talking, one will always wait until the other finished talking and after about 2-3 second, then he/she start talking. Once again, bad acting and seriously bad directing. Don't they rehearse first before shooting to see how the flow of the conversation works out or not? I also hate the many scenes of Nabil arguing with Puteri Sarah. They keep repeating the same ol' lines over and over again.

Next what I wanna talk about is Meet Uncle Hussein (MUH). Yep that indie band. They're in the movie too playing and singing their song in numerous scene just to add up the comedy... I guess... when I look back, it seems that the movie promotes MUH more rather that to present the main idea of the movie which is the story of Nabil's life. No offense to MUH though..

Last but not least, the cameos. Urrrgghh~ too many cameos.. to me, some of the cameos gave no input to the movie at all. I guess Aminah Rhapor want some hype so that when people see names like Vanida Imran, Amy Search, Fahrin, Zizan Raja Lawak and many more.. people might go and watch it at the cinema. These are all cheap gimmick and I feel sorry for Vanida Imran and Ummi of Nur Kasih who are 2 very talented actresses but been given the roles of mediocres who contributed very little. Nabil is a very funny guys but the movie fails to bring his charm on the screen which is a great lost. Going back to the movie poster, Nabil and Mila af5 are suppose to be the main characters in the movie. Newsflash! Mila was in the movie for about 2-3 scenes only thus making the movie poster very misleading.

To wrap up, I'd say this has to be the worse movie ever in my life. I say this because I know, even student like me and and my classmates can make a better movie than Aminah Rhapor. I don't know what's going on in Aminah Rhapor's head when she saw the result of her direction.. What happenned to the art director? There's no art at all in the cinematography.. I would really like to know what Afdlin Shauki's thoughts about this film...

some of my materials were from cinema.com.my

Well, I know I'm harsh and most of you guys might say "does he know what he's talking about" or "you only know how to critisize people's work." Well, what I say are based on the knowledge I learned in film studies and screenwriting classes that I took..

I'm not alone in this matter, I went to see that movie with my trusted friends, Haziq and Remy and the 3 of us are on the same page... can't go wrong there... so enjoy the movie, don't enjoy the movie.. up 2 u.. I know I hated it.. that's it for me now... have a great midterm break MMU people~

what midterm break are you talking about!? psssh!

people reading your post would only wna watch the movie to see the mistakes they've made.. glad i didn't waste my money to watch it..

so harsh! but i like ur honesty :D especially about the poster thing. poster ada muke mila but u said she was in about 2-3 scenes je? the it shud be sarah liyana on the poster. haiyohhh...